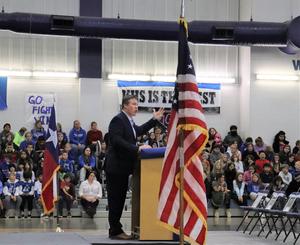 Each year, Krum ISD hosts a program to honor the men and women who have served our country in recognition of Veterans Day. Krum ISD was honored to continue that tradition this year. To begin the program, the colors were presented Krum Fire Department Honor Guard before the KHS Varsity Men’s Choir performed the Star Spangled Banner under the direction of Choir Director Laura Wheless. The Krum EEC First Graders began our student performance with “God Bless America” performed in sign language, led by EEC Music Teacher Shelley White. Following their performance, the Dyer and Dodd Fifth Grade class joined together to sing “In Service to Our Country” under the joint direction of Dodd Music Teacher Elisa Lawson and Fine Arts Coordinator Carol Turner. After hearing the musical talents of the KMS Band performing “Patriotic Medley”, Krum ISD Superintendent Dr. Jason Cochran introduced guest speaker Matthew W. McGuffin, Sergeant Major United States Army Special Forces Airborne (Retired). Following his speech was the presentation of the flags and hymns of each branch of the US Military by the KHS Band and KHS Color Guard. During this presentation, Veterans of each branch are asked to stand for recognition during their respective hymn. Ms. Wheless, with assistance from Brent Hall, led the closing choral performance of "America the Beautiful" which featured combined vocal talents of the KMS and KHS choirs. Thank you to everyone who attended and streamed this event honoring these brave men and women, but most importantly, thank you veterans for your service. An additional thank you to Melynda Rivers for organizing this event.

Photos from this event are available on the Krum ISD Facebook Page.

You can watch a recording of this event here.